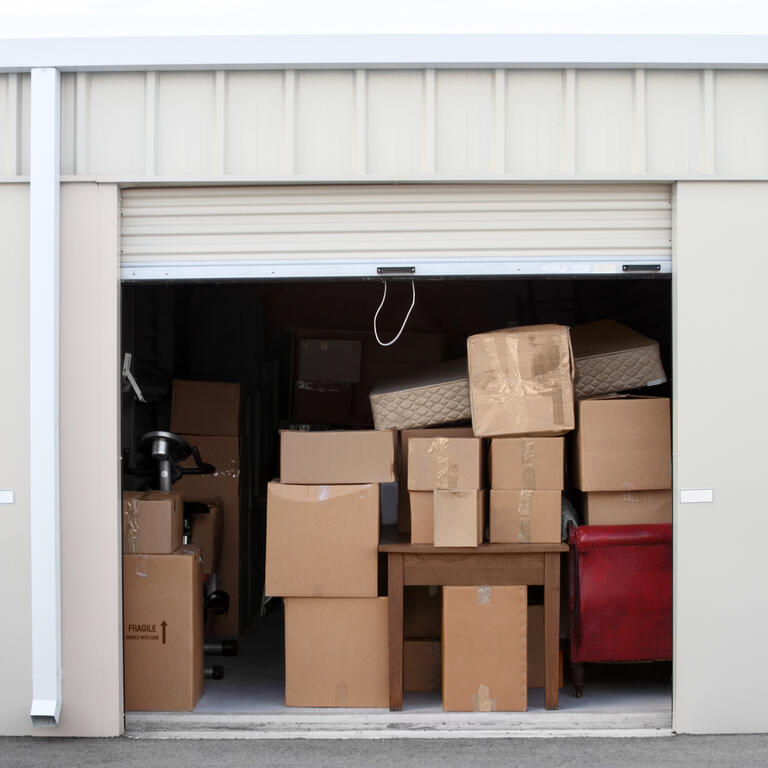 CubeSmart (CUBE) is one of the best income growth rates, in our view. The Self Storage Real Estate Investment Trust (“REIT”) focuses on the United States, an attractive market buoyed by a tailwind of secular growth. Soaring housing prices are encouraging more families to switch to self-storage options as a way to maximize economic living space, creating a massive growth opportunity for CubeSmart.

As of this writing, CUBE shares are generating about 3.4% on a forward-looking basis after CubeSmart announced that it increased its quarterly payments by more than 26% sequentially in November 2021. We expect CubeSmart to continue to pay significant increases in payments over the coming years.

REIT had an economic interest in more than 540 properties in 24 states and Washington, D.C. as of the end of September 2021. In December 2021, CubeSmart closed its acquisition of self-storage platform owner Storage West, LAACO LTD. This acquisition added self-storage facilities to CubeSmart’s operations in Southern California (San Diego and Inland Empire), Arizona (Phoenix), Nevada (Las Vegas), and Texas (Houston). CubeSmart intends to continue growing its self-storage footprint, with a focus on urban markets. It was founded in 2004 and is headquartered in Malvern, Pennsylvania.

CubeSmart’s third-party management platform had more than 700 self-storage properties participating in the program at the end of the third quarter of 2021. REIT has done a great job building this business and intends to continue to grow this operation in the future. The self-storage market in the United States and elsewhere remains highly fragmented, and third-party management platform service can sometimes be used to determine future acquisitions.

The ability of CubeSmart and self-storage companies to generate free cash flow very close to their dividend coverage is a big reason why we like this segment (the self-storage portion) of the REIT industry when looking for income growth opportunities. First, creditors must be more open to lending to a company that can cover distributions internally with free cash flow than one that needs external capital to do so. 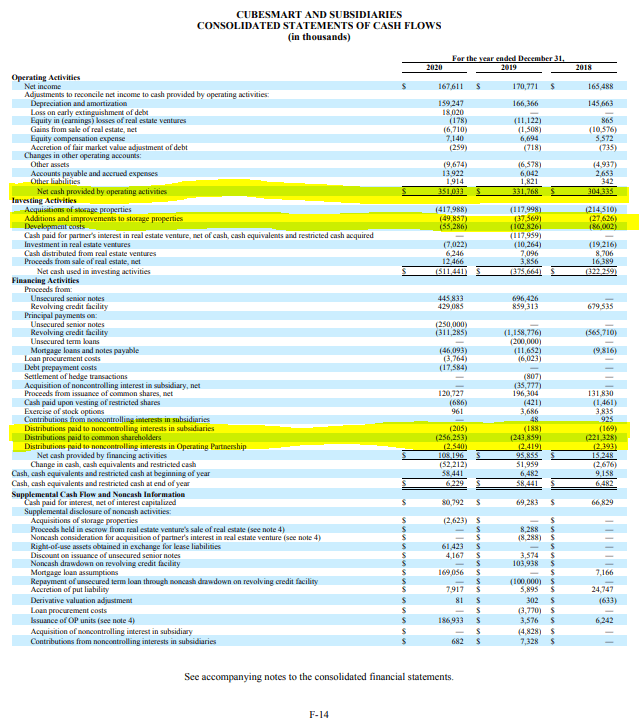 The main components are highlighted in the image above to determine if a company may rely on the capital market when it comes to covering its distributions. In the case of CubeSmart, “additions to property and equipment” and “development costs” are subtracted from “net cash provided through operating activities,” and this difference called conventional free cash flow is compared to the sum of the dividends paid to the company’s shareholders to assess the risk of relying on the capital market to pay . In 2020, for example, CubeSmart generated $246 million in free cash flow and paid out $259 million in dividends.

Despite being so close to earnings, it paid out more dividends than it did traditional free cash flow (and it paid more dividends than internally generated free cash flow in previous years as well). This means that CubeSmart is a humble capital market dependent entity when it comes to covering dividends for the past few years. CubeSmart also has a significant net debt burden (just over $2.2 billion at the end of September 2021, including short-term debt and excluding restricted cash). Maintaining access to the debt and equity markets at attractive rates for maturing debt refinancing, fund acquisitions and other growth attempts, and continuing to meet dividend commitments is an essential part of CubeSmart’s business model.

Recent funding activities, including a secondary equity offering and preferred bond issuances conducted in November 2021, indicate that this is still a case that we truly value. No matter how much we like CubeSmart’s fundamentals, its stock price will be sensitive to changes in interest rates. The current environment reveals the 10-year Treasury rate which is materially lower than that offered by CubeSmart’s yield. However, the 10-year Treasury rate is worth watching closely, having emerged a bit so far in 2022. 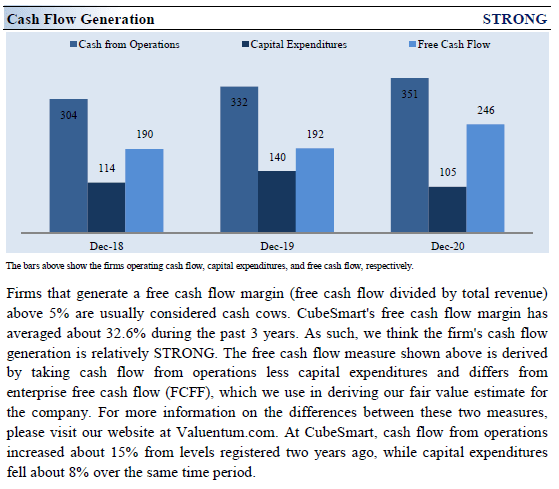 From 2018-2020, CubeSmart generated just over $0.2 billion in free annual cash flow on average, and its operating rate dividend commitment was about $0.25 billion in 2020. This highlights CubeSmart’s solid free cash flow generation capabilities. , but also that traditional free cash flow does not cover dividend obligations.

As for REITs, however, CubeSmart is in good shape, with most REITs nowhere near covering their dividends with traditional free cash flow. However, investors should expect CubeSmart to continue to need to tap the capital markets for funds to cover dividend commitments and growth ambitions.

However, the first nine months of 2021 were simply amazing in terms of traditional free cash flow generation! During this time, CubeSmart generated $342.9 million in cash flow from operations and a total of $93.4 million in capital spending, which is good for generating $249.6 million in free cash flow, exceeding its cash flow dividend of $210.6 million (see image below).

Things are going so well at CubeSmart that it covered its traditional free cash flow dividend for the first nine months of 2021 by a large margin. We think that’s largely why we’ve seen such a huge increase in earnings in the company. For REITs that cover dividends with internally generated free cash flow, the potential for dividend growth is greater than for those without, and that describes CubeSmart, in particular! 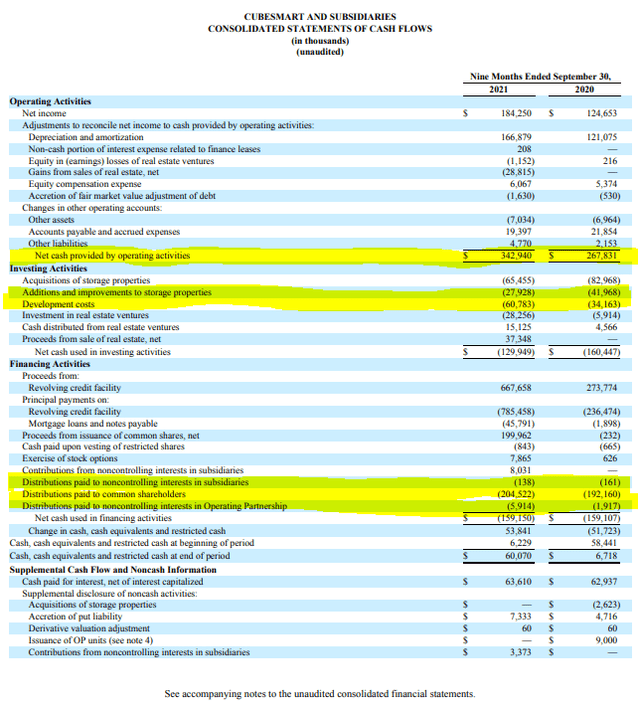 CubeSmart’s same store average occupancy rate was 95.6% in the third quarter of 2021. The strong occupancy performance combined with significant price increases enabled CubeSmart to increase its same store net operating income (“NOI”) by 21% on a basis Annually in the third quarter of 2021, with revenue growth of 16% offsetting a 4% increase in property operating expenses. We appreciate CubeSmart’s operating leverage, which means revenue growth can translate into significant margin expansion.

REIT’s strong performance in the third quarter gave management confidence to raise CubeSmart’s full-year guidance for 2021 once again. Please note that CubeSmart also raised its guidance for 2021 in conjunction with its first and second quarter earnings updates.

In addition, CubeSmart also expects to post $2.09 – $2.10 in funds from operations (‘FFO’) per share in 2021, up from guidance that requires $1.99 – $2.03 in FFO per share. FFO is a non-GAAP metric used to measure the cash flow performance of a REIT, although this metric has its drawbacks (free cash flow is the best way to measure a company’s ability to meet its future payment obligations).

Please note that CubeSmart’s full-year forecast for 2021 as of Q3 is sharply higher than the guidance provided when REIT published its Q4 2020 earnings report. The outlook for the US self-storage industry has improved materially over the past year. Looking ahead, there is ample room for companies like CubeSmart to continue expanding at a robust pace as domestic demand for self-storage services grows rapidly while the industry remains highly fragmented.

We believe CubeSmart is worth $56 per share under the ‘Base’ case scenario with a fair value range of $45 to $67 per share (lower score represents the ‘bear’ case scenario and the upper score represents the ‘bull’ case scenario). Here, we would like to emphasize that we derived the intrinsic value of CubeSmart by forecasting its free cash flows forever, and discounting those expected free cash flows in the future at the appropriate rate which is the estimated weighted average cost of the REIT. [‘WACC’], then take balance sheet considerations into account. The short-term operating forecasts used in an organization’s cash flow models, including revenue and profit forecasts, do not differ much from consensus estimates or management guidance.

The organization’s cash flow model reflects a compound annual revenue growth rate of 10% over the next five years (an achievement that we expect can be achieved through a combination of expected asset base growth, strong occupancy rate performance, and future price increases). This is above the company’s 3-year historical compound annual growth rate of 6.7%. Furthermore, our enterprise cash flow models reflect a 5-year average expected operating margin of 41.3%, which is higher than the 3-year late CubeSmart average. After the fifth year, we assume that free cash flow will grow at an annual rate of 4.3% over the next fifteen years and 3% forever. For CubeSmart, we use a 7.3% weighted average cost of capital to discount future free cash flows. 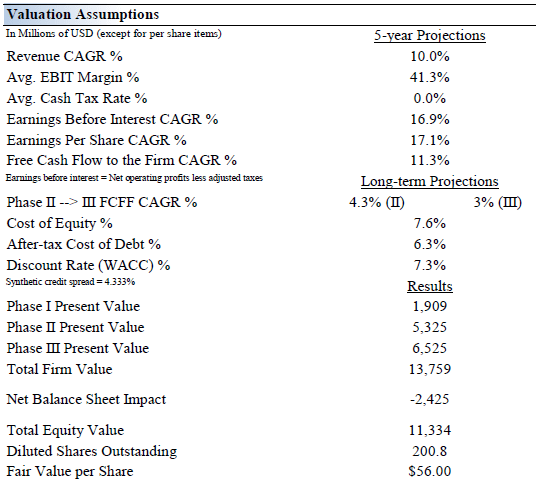 Image shown: Overview of the key evaluation assumptions we used in the base case scenario covering CubeSmart. Image source: Valuentum 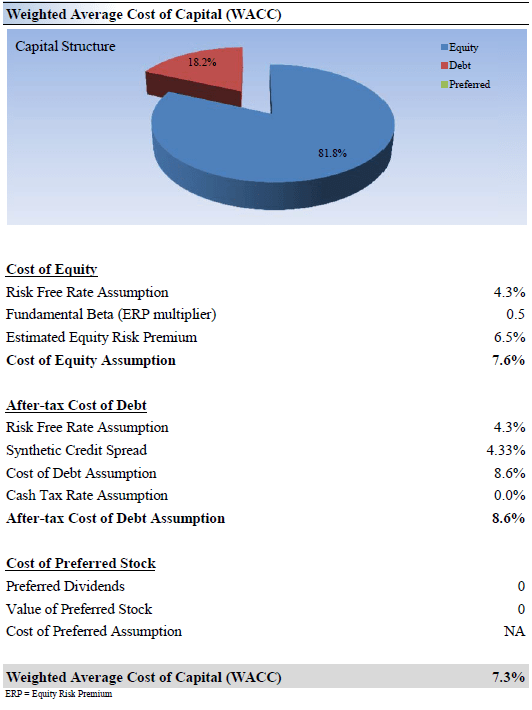 Shown image: Overview of how the estimated WACC for CubeSmart is calculated. Image source: Valuentum 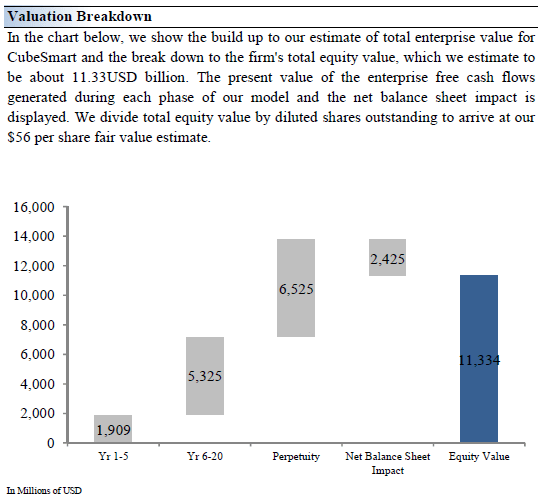 Our DCF estimates each stock based on the present value of all future free cash flows. Although we estimate a company’s fair value at around $56 a share, each company has a range of potential fair values ​​that result from uncertainty from key valuation drivers such as future revenue or earnings, for example. After all, if the future was known for sure, we wouldn’t see much volatility in the markets because the stocks would trade accurately at their known fair values.

In the next graphic below, we show this potential range of CubeSmart fair values. We think the company is attractive at less than $45 per share (green line), but expensive above $67 per share (red line). Prices falling along the yellow line, which include our estimate of fair value, represent a reasonable valuation of the company, in our opinion. At $51 per share at the time of writing, CubeSmart shares present a positive risk/reward attitude, in our view. 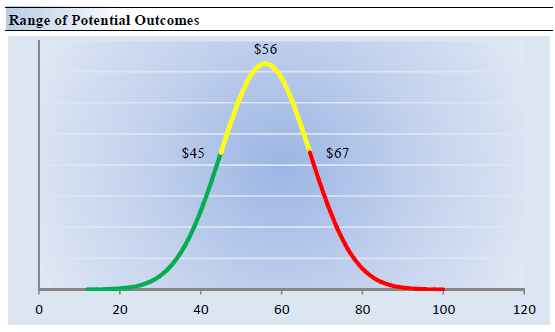 Screenshot: Our maximum fair value estimation range is at $67 per share of CubeSmart and represents a revolutionary case scenario for CubeSmart. Image source: Valuentum

In our view, CubeSmart will continue to increase its payments at a robust pace going forward, backed by its improved near-term outlook, promising long-term growth trajectory, excellent free cash flow generation capabilities, ample pricing power, and a clear ability to tap fund capital markets at attractive rates. Growth in its self-storage asset base through acquisitions and attempts at organic growth combined with expected price increases, made possible by strong secular tailwinds supporting the industry, should increase CubeSmart’s free cash flow in the long-run. CubeSmart is one of the best REITs that are run for self storage and represents a great income growth idea for investors.